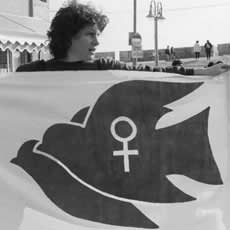 In 1989, a meeting was convened in Brussels between prominent Israeli and Palestinian women peace activists. The meeting initiated an on-going dialogue that in 1994 resulted in the establishment of The Jerusalem Link comprising two women’s organizations Bat Shalom on the Israeli side, and the Jerusalem Center for Women on the Palestinian side. The two organizations share a set of political principles, which serve as the foundation for a cooperative model of co-existence between our respective peoples.

Bat Shalom is an Israeli national feminist grassroots organization of Jewish and Palestinian Israeli women working together for a genuine peace grounded in a just resolution of the Israel-Palestine conflict, respect for human rights, and an equal voice for Jewish and Arab women within Israeli society.

Bat Shalom North was formed in 1993, by Jewish and Palestinian women from the kibbutzim, moshavim, villages and towns in the region of northern Israel known as Megiddo, Nazareth and the Valleys. The group identified the need to work together toward full equality of rights between Jewish and Arab citizens of Israel.

We, the Jewish and Palestinian Israeli women of Bat Shalom, call upon all women to join our active struggle for peace and equality. We refuse to silently bear witness to the destruction of the hope and future of a peaceful reconciliation.